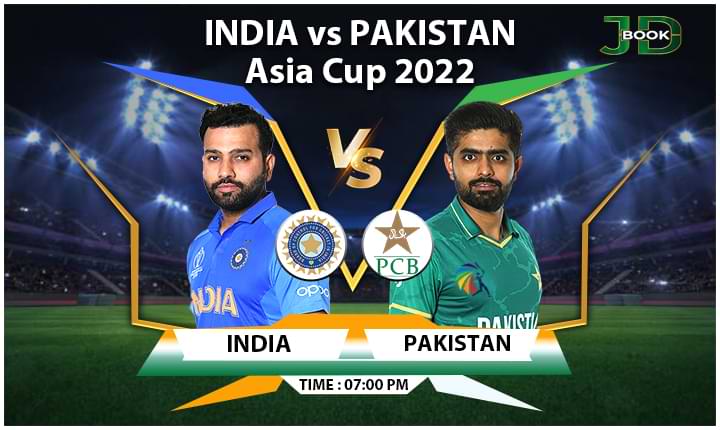 The much-anticipated IND vs PAK Asia Cup 2022 is only a few days away. The match between the rivals will take place on August 28, a day after the tournament officially gets underway. The most recent chapter in the most historic IND vs PAK rivalry in the history of cricket has all of the fans and bookmakers excited. The cricket community is currently counting down the days until the IND vs PAK match, and the odds are currently being prepared at the biggest cricket betting websites.

India is the defending champions of the Asia Cup, and they have won it a record seven times overall, whereas Pakistan has only won it twice. Group A is comprised of India and Pakistan, while the third and last berth will be awarded to the victor of the qualifying event. Sri Lanka, Afghanistan, and Bangladesh are the countries that makeup Group B.

The Asia Cup match IND vs PAK will take place on August 28. It will be the first game of Group A. If both teams are able to advance from their respective groups, they will compete against one another once more in the Super 4 stage, and there is a chance that they will do so a third time in the championship match.

When these IND vs PAK square off at the Dubai International Stadium, you can anticipate an exciting match. When India and Pakistan play each other, it not only results in a high-quality game of cricket but also contributes to the geopolitical and cultural rivalry that exists between the two neighboring countries.

The Twenty20 format will be used for the Asia Cup cricket competition that will feature six teams in 2022, rather than the 50-over format that was used previously. Not only will it deliver high-octane excitement to the fans, but it will also serve as a dress rehearsal for the Twenty20 World Cup, which will take place in October.

Because of the close proximity of these two major competitions, the Indian cricket team that competes in the Asia Cup 2022 is quite likely to be the same team that competes in the World Cup in October. Because of his talent and track record, we anticipate that Virat Kohli will make his way back into the group. Off the field, KL Rahul has been dealing with a spate of unfortunate events.

KL Rahul recently had surgery for a sports hernia after suffering an injury to his hamstring and testing positive for the presence of Covid-19. On the other hand, based only on his performance in the IPL 2022, we anticipate that the star batsman will be included in the squad for the Asia Cup. The skipper of the Lucknow Super Giants scored 616 runs while maintaining a strike rate of 135.38 and a batting average of 51.33.

As a result of his Man of the Series performance against the West Indies, Arshdeep Singh has been selected for the team. Singh took 7 wickets over the course of 5 matches. Recently, the left-arm seamer has had a boost in confidence and has emerged as the ideal choice for death overs because of a low economy and high level of control.

IND vs PAK: Players to keep an eye on

The feisty all-rounder has regained fantastic form, as evidenced by his 281 runs scored and 8 wickets taken in 13 matches played. Pandya guided Gujarat Titans to victory in their first ever season of the Indian Premier League (IPL) 2022, which marked the beginning of the recovery. Pandya finished the IPL season with 487 runs scored and 8 wickets taken.

Even though he has only participated in three Twenty20 Internationals this year, Bumrah continues to be the most important bowler for India. The Indian Premier League season was uneventful for the 28-year-old bowler, who took 15 wickets throughout 14 games. However, Bumrah is a player who excels in pressure situations thanks to his pace, control, and delivering a lethal yorker. He has captured 69 wickets in Twenty20 Internationals at an average of 19.46 while his strike rate is below 7.

Despite his occasional inconsistency, the wicketkeeper-batsman is a valuable striker. Pant can anchor a pursuit and has a variety of strokes to quicken the pace of an innings. This year, he has participated in 13 T20Is, raising his average and strike rate to 26.00 and 135.41, respectively.

There’s a good reason why the Pakistan skipper is the best batsman in Twenty20 Internationals. In Twenty20 Internationals, the classical batter has a respectable batting average of 45.52 and a strike rate of 129.44. In the match against India from the previous year, it was his 152-run combination with Mohammad Rizwan that guided Pakistan to a resounding victory.

In reference to Rizwan, the Pakistan wicketkeeper is the crucial member charged with the responsibility of giving regular starts. Rizwan is a reliable Twenty20 International batter thanks to his outstanding average of 50.36 and his overall average of 128.83. In the most recent season of the PSL, he scored the second-most runs of everyone.

Afridi, the pivotal player in Pakistan’s bowling line-up, finished this season of the Pakistan Super League with the most wickets (20). When the left-arm fast bowler got rid of Rohit Sharma and KL Rahul, it was the beginning of the end for India in the Twenty20 World Cup from the previous year.

When it comes to betting on the IND vs PAK match, stats and records can provide a hint, but the form of teams is the most important factor. The Indian national cricket team has had an outstanding run of success leading up to their participation in the Asia Cup. In 2022 alone, they have competed in and won 16 of their 20 Twenty20 International matches.

Since the Twenty20 World Cup was held a year ago, Pakistan has only competed in seven Twenty20 Internationals. They were victorious in the series against Bangladesh (3-0) and the West Indies (3-0) in 2021, however, they were defeated by Australia in the lone Twenty20 International that year. India comes out on top of Pakistan in terms of recent form based on the number of matches played and the percentage of wins.

If you understand the match odds of IND vs PAK correctly, you may find that they work to your advantage. Before placing a wager, it is essential to give careful consideration to hints and predictions. When Pakistan and India competed against each other in the T20 World Cup the previous year, Pakistan came out on top with a victory by a score of ten wickets.

Both India and Pakistan have a wealth of talent in a variety of fields. We anticipate that the match will feature superstars like Rohit Sharma, Babar Azam, and Virat Kohli, as well as hitters like Hardik Pandya, Rishabh Pant, and Mohammad Rizwan, and scorching pacers like Jasprit Bumrah and Shaheen Afridi.

However, India is currently in the first place due to Yuzvendra Chahal. The leggie Chahal has surged back to form with match-winning efforts against England and West Indies after a minor dip in form earlier in the season. Ravindra Jadeja will lend a helping hand with the left-arm spin he possesses. For the third spinner position, Ravichandran Ashwin, Ravi Bishnoi, Axar Patel, and Kuldeep Yadav will compete against one another.

India’s bottom order has recently come to the team’s rescue on many occasions and has the potential to be the deciding factor in the match against Pakistan. However, as their previous matchup in the Twenty20 World Cup demonstrated, the outcome of the cricket match in the Asia cup 2022 is by no means a predetermined conclusion, yet India’s chances to thump a victory against Pakistan are clearly visible.

We hope you have gone through the article. Don’t wait around too much if you want to get started on online betting. Join JDbook to experience the best cricket betting services that you can avail yourself of.